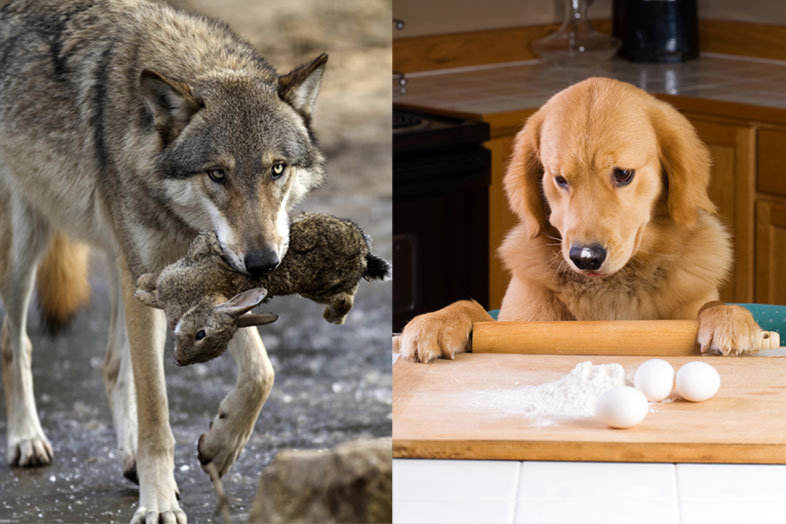 Dog food then and now

A good friend recommended baked dry dog food to us. It sounded quite promising, and we wanted to learn more about it. With us, not everything goes into the bowls of our two darlings, Balu and Max (both Golden Retrievers).

In fact, we are very picky when it comes to food. The search for unbiased information about baked dry food turned out to be unexpectedly difficult. Therefore, we have written a summary for all others who are interested.

We hope you enjoy reading it, Peter and Ilona P.

Dry food for dogs can be produced in different ways. One of them is baking. This process has been around for a very long time, but it is apparently not without controversy.

The invention of dog food

In the past, dogs were mainly given food scraps. This could be offal and bones, but often they had to make do with soaked bread or potatoes. They received everything that fell off somewhere. This went on for several thousand years. But then came the big turning point: In 1860, the English businessman James Spratt had observed sailors feeding their dogs on board with leftover biscuits. His idea was to produce special dog biscuits. Unfortunately, people at the time had little idea of how to feed dogs in a species-appropriate way, and they didn't want to waste valuable meat on them. Thus, the first recipe of baked dog food consisted of wheat flour, vegetables, beets and beef blood. In the absence of an alternative, this food seemed to go down very well with dogs. The dog cakes became a success and were the first commercially produced dog food in the world. 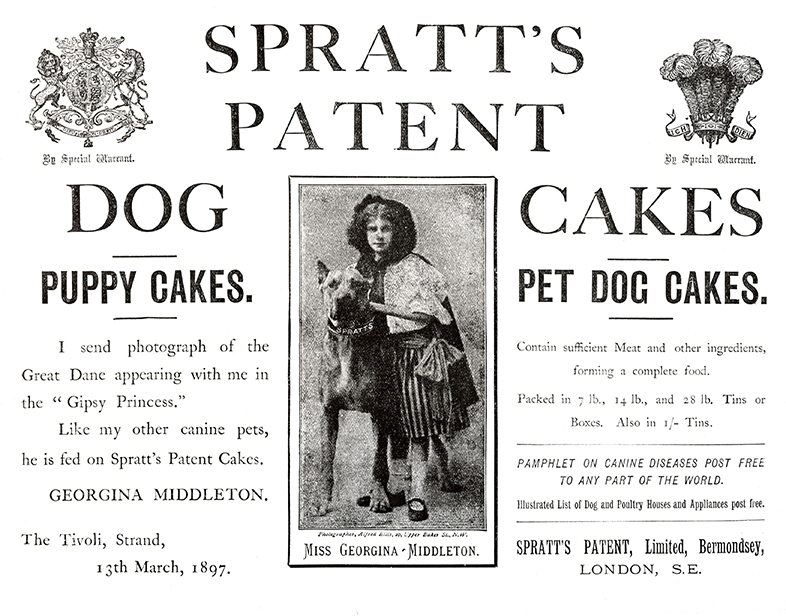 How is baked dog food made?

To bake dog food, the individual ingredients are first dried and finely ground. Then they are mixed and blended with water to make a feed dough. This is rolled out or rolled into long strands to make the desired shapes. Here lies one of the problems with this method of preparation: In order for the feed not to be crumbly and fall apart later, it must contain ingredients with a certain adhesive property. Typically, the gluten protein is used for this purpose. In combination with water and heat, it hardens so that the feed retains its shape. Gluten is found in wheat and spelt, among other grains. But many dog owners would like to do without grain in their dog food. In this case, the choice of baked dog food is significantly reduced. 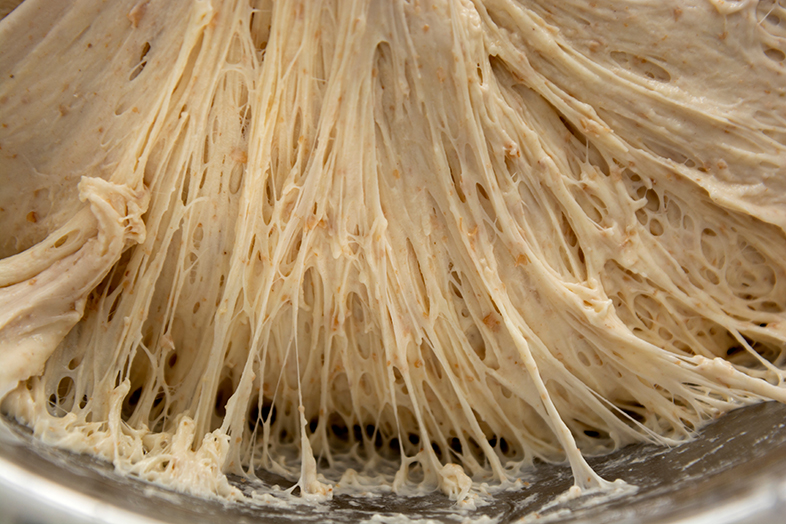 It should also be known that there is hardly any leeway for the fat content in baked dog food. This is similar to baking cookies. If there is too little fat, the dough will be crumbly, and if there is too much fat, it will be difficult to shape. As a result, manufacturers have very few options when it comes to varying their recipes. You can't offer nearly as wide of a selection as you can with other manufacturing processes..

While baking is the oldest form of dog food production, it is not without controversy. This is because, depending on how long and especially at what heat the dough is baked, there is a risk of acrylamide developing. According to an opinion from the European Food Safety Authority, this substance potentially increases the risk of cancer and changes in genetic material. Unfortunately, the temperature at which the manufacturers of baked dog food bake their dough is not known. At temperatures of 170 degrees and above, acrylamide formation skyrockets. Stiftung Warentest, a German foundation and independent consumer organization, proved in June 2016 that this is not just a potential threat in a baked dog food.

How is baked dog food received by dogs?

Acceptance varies greatly among dogs. In general, the drier a food is, the less meat it contains and the less tempting it smells, and the less dogs like it. From the point of view of our dogs, baked dog food therefore scores comparatively poorly. It is dust-dry, its odour of meaty food is only insignificantly perceivable, and it typically has a very small meat content. Above all, you won't please fussy eaters with baked dog food. For us humans, baked food often smells quite good, but many dogs obviously see this differently. Therefore, baked dog cookies are only useful as a treat in between meals.

Does baked dog food swell up?

Dry food that swells up increases the risk of a commonly fatal twisting of the stomach (gastric distention). This usually affects larger dogs. When choosing food for Balu and Max, we take special care that no dog food that swells up goes into their bowls. Apparently, not all baked dog food swells. If in doubt, we recommend performing a swelling test before feeding. To do this, place a handful of dry food in a glass of water for about two hours. If it swells during this time, we would advise against it. 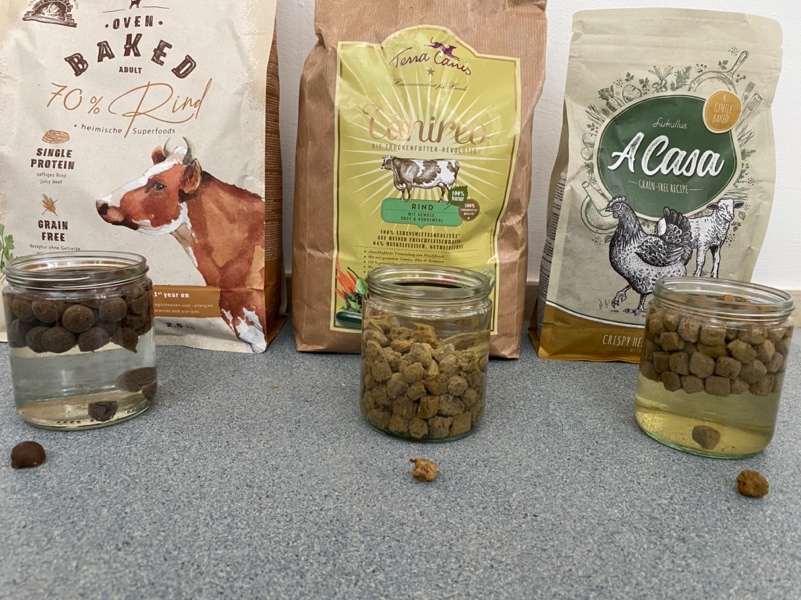 After about two hours: 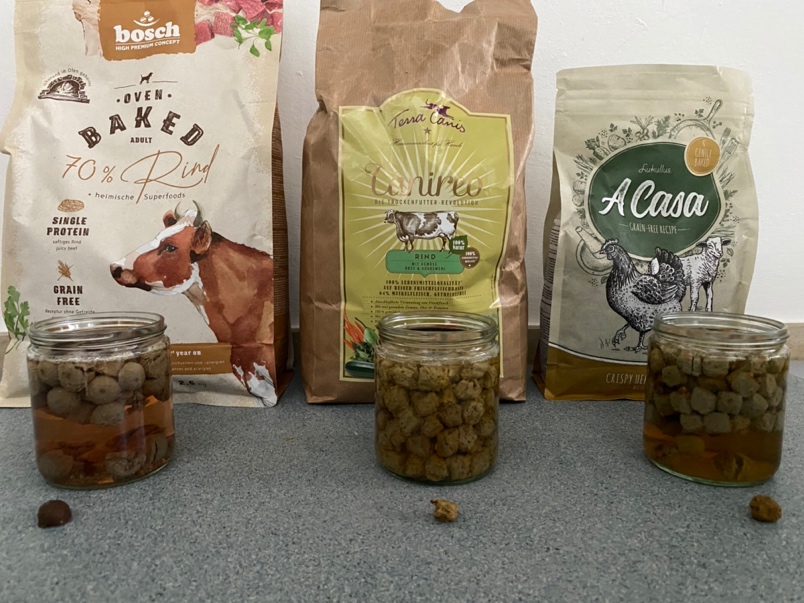